How does space sound

Music from space: this is what space sounds like

Domenico Vicinanza composes a piece of music based on measurement data from the Voyager space probes. The physicist makes the silence of the universe audible. 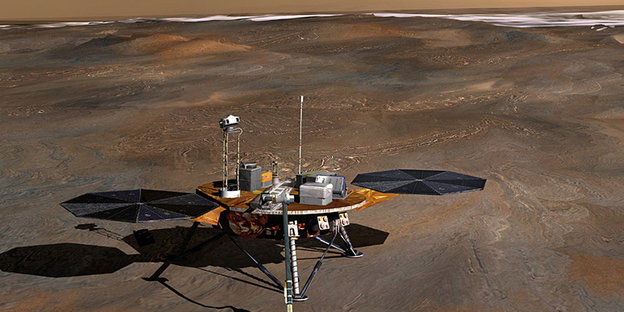 What does Mars sound like? The Phoenix space probe, which can be seen here, has been searching for traces of life on Mars since 2008 - not for sounds. Image: dpa

Space is an anechoic space. A place whose silence is as eerie as it is fascinating in the earthly imagination. Yet silence is not just the absence of sound; it is also the absence of intentionally created sound. The composer John Cage once came to this conclusion when he heard the flow of his own blood in an anechoic room.

But how does the absent sound sound in space? Domenico Vicinanza, manager at the Géant Institute in Cambridge, UK, the largest pan-European data network for European research, has now found a way to make the cosmic background radiation, i.e. the electromagnetic particles floating around in space, audible.

The trained musician and doctor of physics evaluated around 320,000 pieces of data collected over a period of 36 years on the flights of the two Voyager probes. Vicinanza then converted the data recorded by the plasma wave detectors into sound fragments with different lengths and frequency ranges. Then he assigned certain tones to them.

With the composition entitled “Voyager 1 & 2 spacecraft duet”, Vicinanza wanted to fill a gap: “I wanted to compose a musical piece that included Voyager 1 and 2, so I used the measurements (the proton counts from the last 36 years) of both Space probes. "

Voyager 1 first left orbit in 1977 to study the planets Jupiter, Saturn, Neptune, and Uranus. Both probes are now 15 billion kilometers away from Earth in different directions.

However, the final musical product then sounds far less interesting than the story behind it. Anyone who expects futuristically eccentric beat designs à la Ras G or synthesizer jams practiced on Krautrock will be disappointed - while advocates of high musical culture can rejoice: the work, orchestrated with piano and strings, sounds tiring late-romantic.

In the age of sampling, however, it should not be long before more adventurous sound artists take on the strange data. Because these should not be lacking in the future. Voyager 1 and 2 are shut down, but they are still steadfastly sending information back to Earth.