Why am I so fascinated by anthropomorphism?

The place for animals

David rules the West African Senegal. He cannot trust anyone in his territory. Everyone wants their crown. David is alone. This is a story about power, politics and the struggle for survival in a chimpanzee dynasty over the male alpha animal named David.

The first section of the five-part BBC documentary "Wild Dynasties - The Animal Clans", which is now also available in German, narrated by actor Sebastian Koch, begins with powerful images and words. Right at the beginning of “Revolt of the Chimpanzees” David wanders upright like a human on two legs through the undergrowth. Dramatic music plays as the narrator introduces David's screaming arch-rivals, Jumkin and Luthor. Jumkin makes a good impression when he is shown proudly and upright with a stick in his hand. Shortly afterwards, the camera records the alpha male David's toes, which begin to twitch. The narrator speaks of a nervous tic of the excited David, whom he does not know how to control. At the end of the dramatically staged piece, a monkey asks the other for forgiveness, the narrator interprets the scene as a submissive gesture.

I am thrilled, not least because this documentation is special. Her secret of success is the trick of a dense, but above all anthropomorphizing narrative style that gets under your skin. There is an overwhelming closeness to the animals. So it is quite a calculation when BBC America moves “Wild Dynasties - The Animal Clans” close to the hit series “Game of Thrones” and tweets “Like #GameofThrones in the wild” accordingly. While two-legged men fight for power and supremacy in various kingdoms in the HBO bestseller, chimpanzees David, tigress Raj Bera, desert bitch Tait and lioness Charm defend their bloodline with all their might against intruders and adversaries in the BBC animal documentary.

In this successful narrative piece, a great storyteller breathes a soul into the animals. Deeply touched and fascinated, I still ask myself whether the narrator's interpretation is always the right one. After all, anthropomorphism in animals - that is, the attribution of human characteristics - is considered a mortal sin by behavioral biologists. The famous primate researcher Jane Goodall, who gave the chimpanzees she observed years ago names instead of numbers, had to deal with such criticism. Goodall once told of the male chimpanzee Flint, who was mentally and physically weakened after the death of his mother Flo and then also blessed the temporal. "Flint died of grief," said Goodall. The researcher was not astonished by the attacks by her scientific colleagues that followed immediately. "I committed the worst behavioral sin - anthropomorphism," she confessed.

It is true that our tendency to project human characteristics onto other living beings can obscure our view of the true nature of animals as well as their world of feelings and experiences. From my point of view, only those who really harm the animals to which he refers are sinned. This is rarely the case. Far more interesting from my point of view is to find out why people differ so much in their tendency to humanize animals. The recently deceased fashion tsar and animal lover Karl Lagerfeld anthropomorphized excessively when he spoke of his cat: “It is like a human being. But the good thing is that she is silent, there is nothing to discuss. ”The farmer, who deals professionally with his livestock, is quite different. “I definitely don't want to humanize animals: a sow is pregnant and not pregnant,” a young farm owner once told me.

While fashion czar Karl may have been more of an animal friend than a philanthropist, the farmer has to be more hardened to his work. After all, at some point he sends his animals to the butcher.

The self-proclaimed "Dog Shamers, who perpetuate themselves on the Internet, have a really strange way of dealing with their animals." On the English-language website “dog shaming”, registered users outbid each other with statements that are as nonsensical as possible, which they put “in their dogs' mouths”. The four-legged friends pose for a photo with appropriately labeled cardboard dangling around their necks. The fooling around may be harmless, but there is no doubt that it can be done without. 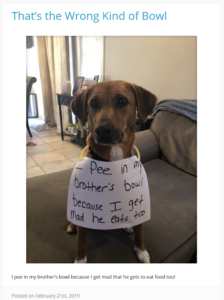 Exposed: does that have to be?

According to researchers from York University in Canada, the different behavior in dealing with anthropomorphizing rhetoric also has to do with experiences in one's own childhood. Adults in particular are inclined to humanize the non-human who come from a socially better-off, wealthy family, but who do not have a trustworthy, secure bond with caregivers. As a result, they develop a need for sociability, but this excludes human beings. When they “flee” into the animal world, they also tend to project their feelings onto the animals in their immediate vicinity in order to be able to better understand and influence their surroundings. To put it simply, one can speak of a need for control that is decisive for anthropomorphising behavior. That all sounds very plausible. But what human is inclined to recognize a nod of approval when a chimpanzee moves its head up and down?

So it doesn't matter what drive Jane Godall had for her anthropomorphic language. In any case, with her irrepressible love of animals, the behavioral scientist shaped my image of chimpanzees in a wonderful way during my childhood. Her loving descriptions of David Greybeard, Goliath, Flo and Flint triggered boundless sympathy and a kind of protective instinct towards the animals in me. Who couldn't feel so connected to the animals? How could poachers be so ruthless? In my mind, Jane Goodall was an admirable heroine even then, and her protégés were consistently adorable. To this day, the primate researcher has not lost any of her status with her gentle manner.

Her observations prove that the researcher neither belittled nor played down her favorites: In addition to such virtuous behavior as pity and sadness, she also described their tendency to deceit. During my studies during a seminar on the “use of tools by animals” I learned that chimpanzees sharpen spears in order to make their victims - Galagos, little monkeys, also known as bush babies - defenseless in their sleep to impale. Jane Godall made a difference in her choice of language. But at the same time she left the animals their nature and described their behavior for posterity. The makers of the BBC documentary used the stylistic device of humanization to bring back these childlike memories of Godall in me. The BBC's film team also did a thorough job. Behavioral biologists who have been observing the wild animals for years and therefore know them well were accompanied for the shooting.

About the sense and nonsense of humanizing animals

Nobody would lump Karl Lagerfeld and Jane Godall together. What they have in common, however, is their tendency to anthropomorphize. When is the humanization of animals considered successful?

An error has occurred. Please check your entries.