What was the genocide of the Armenians?

As part of the so-called "solution to the Armenian problem", the Ottoman troops drove hundreds of thousands of Armenians on endless hunger marches into the Syrian desert in 1915 and 1916. Thousands of Armenians from all parts of the country were rounded up and executed. While many historians today refer to the death marches and massacres as "genocide", the Turkish government has so far only conceded that there were mass expulsions and violent clashes.

Consequences of a crumbling empire

At the end of the 19th century, the traditional settlement area of ​​the Armenians was divided into the Ottoman, Persian and Russian empires. With around two million people, the Armenians made up the second largest minority in the Ottoman Empire after the Greeks. The beginning of the disintegration of the multi-ethnic Ottoman Empire and the growing nationalism of the individual population groups came to a head in the run-up to the First World War.

Protests by Armenian farmers and traders against the high tax burden soon resulted in the first uprisings, which were brutally suppressed by Ottoman troops. Between 1890 and the outbreak of World War I, there were repeated massacres of Armenians, perpetrated by Turks and Kurds. During the same period there were numerous attacks by Armenian terrorists, including on the ruling sultan. 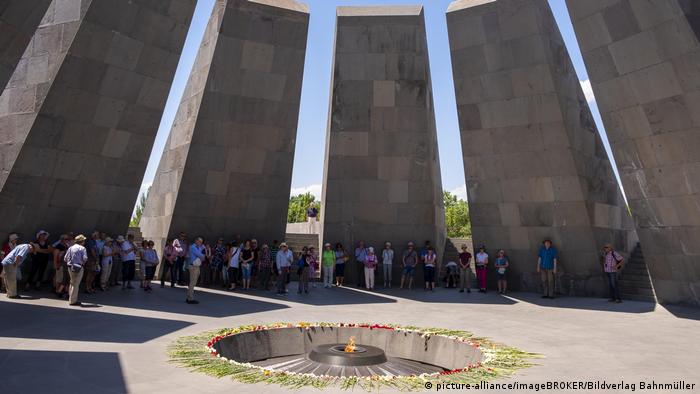 In Yerevan, the capital of Armenia, the Zizernakaberd memorial commemorates the genocide of 1915/16

During the war, the Ottoman Empire fought against Russia - many Armenians, however, took part in partisan groups who wanted to help the troops of the Russian tsar invade. The Armenian volunteer battalions that fought on the Russian side hoped that the tsar would later support the Armenian struggle for independence.

The Ottoman leadership blamed the Armenians for the military defeat in the conflict with Russia. In early 1915, the Armenian soldiers in the Ottoman army were disarmed; whole companies were assigned to build roads and later shot.

In an increasingly violent anti-Armenian climate, thousands of intellectuals were arrested and deported during raids against the Armenian elite in Istanbul on April 24, 1915 - the declared goal of the Interior Minister at the time was to remove all Armenians from the capital. Then in May the Ottoman army began mass evicting Armenians from the east of the country on the grounds that they could support the Russian invaders.

The then German vice-consul in Erzurum wrote to the German ambassador in Istanbul: "After the war we will have no more Armenians in Turkey" is the literal expression of an authoritative figure. If this goal cannot be achieved through the various massacres, one hopes that the hardships of the long hike to Mesopotamia and the unfamiliar climate there will do the rest. " 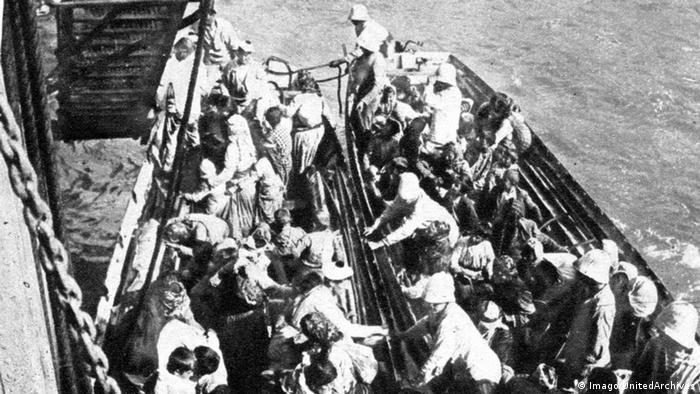 Escape the massacres: Armenian refugees who fled by boat are received by French soldiers

"Outrage of the Past"

After the collapse of the Ottoman Empire in 1919, the Grand Vizier Ferid Pasha officially spoke of a "crime" against the Armenians, while the then Foreign Minister Cemal put the number of victims of the deportations at 800,000.

At the opening of parliament in Ankara on April 24, 1920, the founder of the Turkish Republic, Kemal Ataturk, described the genocide of the Armenians as "an outrage of the past" - later Turkish governments refused, and still refuse to this day, by one Genocide to speak.

The UN Convention on the Punishment of Genocide, which came into force in January 1951, defines genocide as "acts committed with the intent to destroy, in whole or in part, a national, ethnic or religious group." A majority of scientists see this resolution as documented by historical sources. Several states have officially recognized the Armenian genocide, including the Federal Republic of Germany. 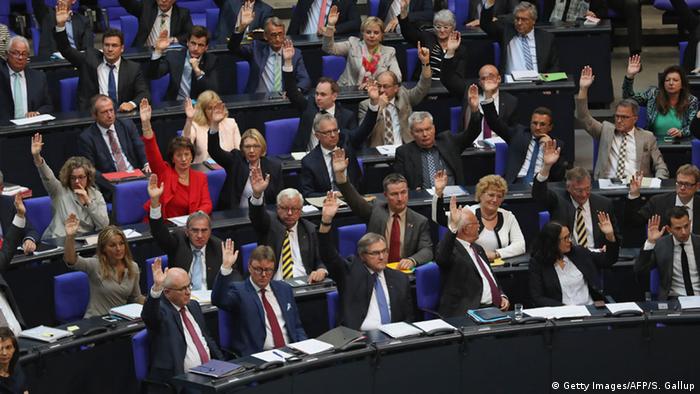 In 2016, the German Bundestag voted in favor of the Armenia resolution with a large majority

In a statement from June 2005, the Bundestag explicitly apologized to the Armenian people for the attitude of the German Reich, which at that time had done nothing to prevent the annihilation of the Armenian minority.

In 2016 the German Bundestag passed a resolution on "Remembrance and commemoration of the genocide of the Armenians and other Christian minorities in 1915 and 1916" - Chancellor Merkel and then Vice Chancellor Sigmar Gabriel and then Foreign Minister and current President Frank-Walter Steinmeier were however, stayed away from the debate and the vote.