An overview of Asian noodles

Whether spaghetti, farfalle, ravioli or tagliatelle: the selection of pasta types on the European continent alone is huge. If you look to Asia you will see that there are many more types of pasta to discover in the world. While pasta based on egg and wheat flour is common in our country, noodles in Asian countries are not only made from wheat, but often from rice and starch. The variety of shapes and flavors is as enormous as in Europe - traditional Japanese cuisine and other Asian country kitchens also have the right type of noodle for every dish. Kikkoman introduces you to the most important ones: 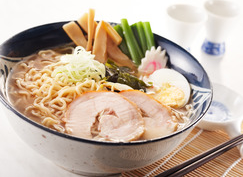 Whether as a quick snack, as street food or upscale in a restaurant: Traditionally, dishes with ramen are among those most commonly consumed in Japan. Ramen are made from wheat flour, salt, water and a slightly salty mineral water called kansui. They have different lengths and shapes and are sometimes thin, sometimes thick, sometimes straight or even folded.
Ramen noodles are served with meat or vegetable broth, which is usually seasoned with soy sauce or miso paste. The topping is often thin slices of pork (chāshū), dried seaweed (nori) and some bamboo (menma) and spring onions. The preparation of the pasta dish is very different from region to region.

The brown-gray soba noodles are traditionally an important component, especially in Japanese cuisine, also known as washoku. They are made from buckwheat flour and water, giving them an unmistakable, slightly nutty aroma. Sometimes adding green tea powder also turns them greenish.
Soba noodles are traditionally served either cold with various dips or as an addition to noodle soups. The broths then usually consist of fish stock (dashi) and soy sauce. As with udon noodles, the topping of soba noodle dishes is also based on the season. The toppings are usually the same as for udon noodles. 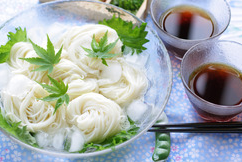 Somen noodles are very fine. White and long, they consist of wheat flour, table salt and water. Compared to udon noodles, they are thinner. Cold and dipped in broth made from fish stock (dashi) and soy sauce, garnished with fresh ginger, vermicelli is a popular dish, especially in hot summer. 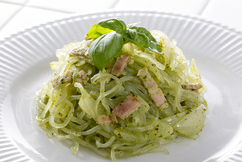 The almost transparent vermicelli is low in carbohydrates and fat. That is why they are popular with many who want to lose a few pounds. Shirataki noodles are made from the konjac root, but they have little taste of their own, so they absorb the flavor of sauces well and are used in almost all Asian dishes. Try our Shirataki Linguini or our Shirataki Salad. 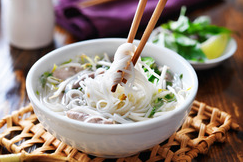 The typical Asian rice noodles consist of rice flour and water. To prepare them, they are not specially boiled, just poured boiling water over them, in which they then swell for different lengths of time depending on their thickness and width. Rice noodles are served as an accompaniment to wok dishes, in salads or in soups. They are among the most frequently used ingredients in East Asian cuisine and are generally ideal for a gluten-free diet. Do you live gluten-free too? Do you already know our gluten-free Tamari soy sauce? 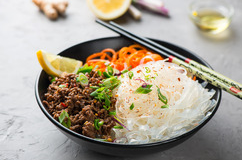 Asian glass noodles are almost transparent - a fact that gives them their name. They are made from starch, mostly obtained from mung beans, potatoes, sweet potatoes, tapioca or hemp, and water. They are then available in dried form. For consumption, the glass noodles are soaked in water and used in soups, wok dishes or spring rolls.

Kikkoman's tip: Garnish your next wok dish with fried glass noodles. Our video shows you how the delicious, crispy crunch is created. 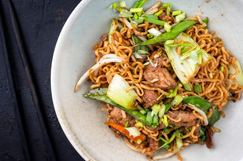 Also known as Mie noodles, these noodles contain a lot of egg in addition to wheat flour, water and salt. That's why they look a bit like our classic spaghetti in terms of appearance, taste and preparation. However, due to the high egg content, they have an intense taste and are particularly suitable for dishes with hearty sauces because they can absorb them very well with their rougher surface. For example, for our teriyaki noodles with steak strips.