What is a cable car 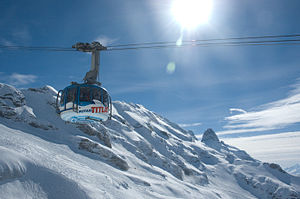 A cable car in Switzerland. This aerial tramway has two large gondolas that go back and forth between the two stations. They travel on two thick suspension ropes. The thinner pull rope is in the middle of it.

A cable car is a vehicle that can be used to bring people or things from one place to another. In such a railway, a rope runs between two small train stations, the stations. Vehicles in which people or things are transported hang on this rope. Most of the time the vehicles themselves do not have an engine. They are attached to the pull rope and this pull rope is driven by motors in the stations. Sometimes there are also one or more middle stations on the route.

There are very different forms of cable cars. The rope and the vehicles can hang in the air. Or the vehicles are pulled over rails by the rope. The rope consists of individual wires made of steel. It is therefore called a wire rope, and more rarely steel rope.

Cable cars are particularly common in the mountains. They are used to transport tourists to the mountains so that they can hike, ski or just enjoy the view. In the mountains, one also speaks of mountain railways.

Cable cars are also often used to transport things in the mountains. Cable cars are very useful when you want to take something where you cannot get to by road. Material ropeways like this are also needed in mining.

Meanwhile, more and more cable cars are being built in cities. While buses and trams can get stuck in traffic jams and take up a lot of space, a cable car floats in the air. You can also enjoy a great view. They have been around for a long time in some cities in the mountains of South America.

What types of cable cars are there?

The armchair is attached to the rope with this special clamp. It is automatically opened in the stations so that the armchairs can be detached from the rope. This means that the track can be coupled.

In aerial ropeways, the rope hangs in the air and, depending on the route, runs over several supports. These are tall masts on which the rope runs over wheels. There are aerial tramways and orbit. On the aerial tramway, two large cabins usually go back and forth between the two stations. You then stay in the station. The train rolls on two thick suspension ropes. In between there is a thinner pull rope that pulls the cabins.

In an orbit, a single rope goes around in a circle without stopping. The vehicles are attached to it. Such vehicles can be small cabins for around four to ten people, in which case one speaks of a gondola lift. Or there are armchairs for up to eight people, this is called a chairlift.

Such orbits can have different speeds. On the rather slow tracks, the vehicles are firmly attached to the rope. These trains run so slowly that passengers can easily get on while the train continues. Sometimes an assembly line also helps them with this. Faster trains with large cabins or armchairs can be uncoupled in most cases. This means that the vehicles in the stations are automatically released from the rope and braked. While the rope can continue to turn quickly the entire time, the vehicles are slowly guided around the station on rails. This allows passengers to board comfortably. Then the vehicle is accelerated and clamped again on the rope. All of this happens fully automatically.

There are also drag lifts. With such a track, the rope hangs in the air and runs over supports. The passengers are standing firmly on the ground the whole time and are being pulled up a mountain. But that only works in winter when the passengers usually have skis or snowboards with which they glide over the snow. They are also called anchor lifts or t-bar lifts, and they each fit two people. In the platter lift, the passenger clamps a rod with a small plastic plate between their legs and can be pulled up.

Another form of cable car runs over rails. It is also called the funicular. At first glance, your vehicles resemble a normal train car. You are being pulled up a mountain by a rope. The rope does not hang in the air, but runs level with the rails. Usually there are two cars in total. One always drives uphill while the other drives downhill. This has the additional advantage that the downhill track pulls the uphill track with its weight. That takes less electricity. As with an aerial tramway, the cars stop in the station.

There were also trams pulled by a cable for a while. The cable cars in the American city of San Francisco are the last such train. It's very hilly in this city.

There are also other search results for “Cable Car” from Blinde Kuh and Ask Finn.