Which city would you live to choose

Mass exodus to the village?

It was only a few days ago that the futurologist Daniel Dettling predicted the renaissance of village life in his KOMMUNAL column. An opinion with which he is not alone. In an interview on the outlook for the new year 2020, futurologist Matthias Horx had exactly this thesis at the turn of the year. Now the Kantar Institute (formerly Emnid) has backed this thesis with facts. The institute asked more than 2,500 representatively selected people where they would like to live if they could choose freely. According to this, even the majority of city dwellers are drawn at least to the outskirts or even to villages or small towns. The statements associated with country life are also noteworthy. Urban life in particular is not only expecting cheaper living space and a larger apartment from rural life. Statements such as "I would like to live more in the country" are also often mentioned with the desire for change. So it's about much more than affordable housing. 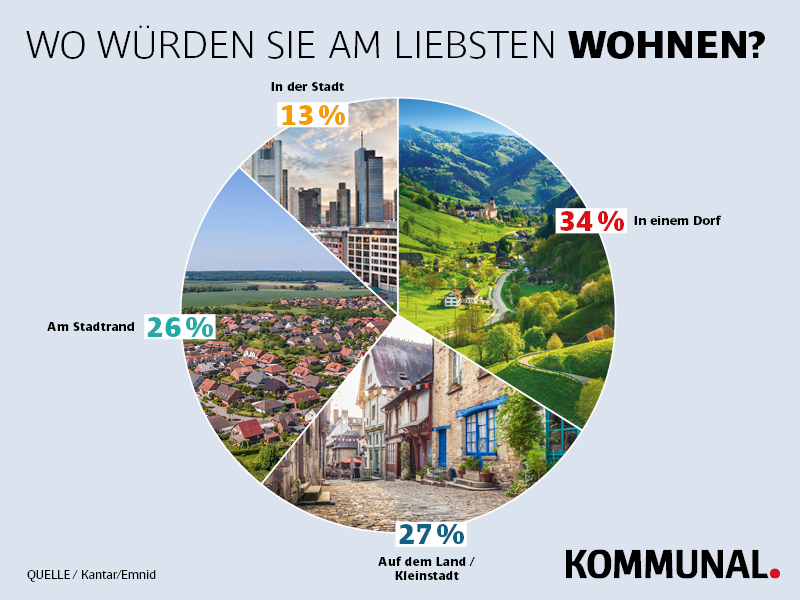 However, the village does not go down equally well with everyone; there are strikingly large differences between West Germany and East Germany. While in the west, rural life is the first wish of 62 percent of people, in the young federal states it is "only" 52 percent. The residents of eastern German federal states want to move "to the outskirts" much more often. (38 percent, in the west it is 23 percent). The reason is obvious: In East Germany the "big cities" are significantly smaller overall, the state capital of Brandenburg, Potsdam, has around 180,000 inhabitants, the state capital of Mecklenburg-Western Pomerania (Schwerin) only has 95,000 inhabitants. West German state capitals such as Düsseldorf (610,000 inhabitants) or Munich (1.5 million inhabitants) are usually considerably larger.

At the same time, the infrastructure in many very rural regions in eastern Germany is still characterized by vacancies, emigration, a lack of doctors, pharmacies and supermarkets. Because short distances to shops and authorities remain important for citizens. If you want to promote the regions in Eastern Germany, you have to start right here and invest in infrastructure. 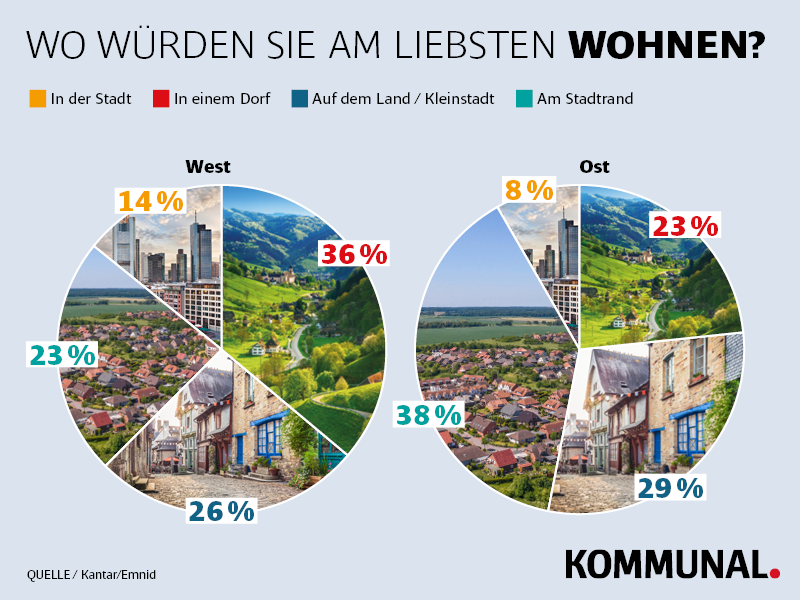 The most important message of the survey, however, is: The village has a future. Because it is by no means the case that young people automatically want to move to the big city and that the "demographic problem" inevitably affects them. On the contrary: the desire for rural life also dominates among young people under 40 years of age. 59 percent say they want to live in a village, in the country or in a small town. The city center is much more attractive for very young people than for older people, but even here, "only" one in five Germans would like to voluntarily move there.

What planners in the village and in small towns should definitely have on their radar. The young generation is satisfied with significantly less space than older people. When asked how many square meters per person people feel comfortable in, most of the under 30 year olds answered with "26-45 square meters per person", namely one in two. Older people over 60, on the other hand, want significantly more space (at least 60 square meters per person). Statistically speaking, every resident in Germany currently lives in around 46 square meters. This number has grown continuously for 20 years. If you follow the survey, this trend could slowly but surely reverse again, at least when it comes to young people. 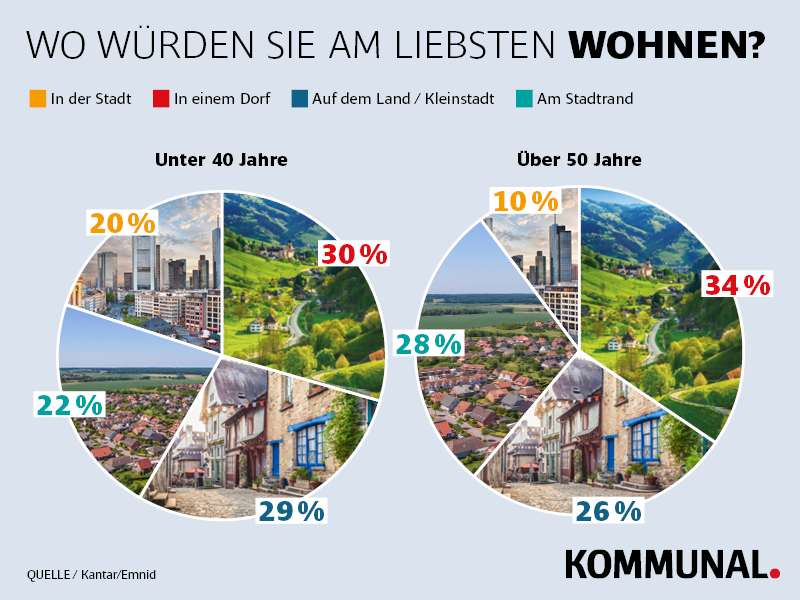 And the survey on the discussion about "exploding housing prices" has yet another interesting result. Only one in seven Germans would like to spend less money on housing in the future. So the bottom line is that Germans are apparently quite satisfied with the rental and purchase prices. This is especially true for women, by the way, here only one in nine feels the desire to want to spend less money on living in the future. It is one in six men. Basically, "only" single households perceive their housing costs as "too expensive" (28%), with two-person households this value drops to 9 percent, with families with children the value is around 11 percent.