Does string theory explain the duality of wave particles

Wave-particle dualism, the fact that matter appears as a wave (field) or particle (corpuscle) depending on the experimental conditions. The dualism of light was established in 1905 by A. Einstein with his explanation of the photo effect through corpuscular matter, after the wave interpretation of light dominated for over a hundred years. It seemed inviolable, especially since H. Hertz's proof of the existence of electromagnetic waves. Further evidence for the wave-particle dualism was provided by the Compton effect (1925) and the point-like blackening of a photo plate by light flashes of the lowest intensity. The analog wave-particle dualism for matter (with rest mass different from zero) was first postulated by de Broglie (De Broglie wave) and then brilliantly confirmed by electron diffraction (Davisson and Germer, 1927). The wave-particle dualism favors the complementary description as an appropriate description of waves and corpuscles.

With the help of the scanning tunneling microscope, atoms or molecules can now be arranged in the smallest of structures in which the experimenter can 'play' with electron waves almost like water waves. For example, researchers at the IBM laboratory in San Jose placed a single cobalt atom on a copper surface in one focal point of an elliptical chain of atoms and observed a true-to-original image of the cobalt atom's electronic signature, a so-called 'quantum mirage', in the other focal point. (see fig.). 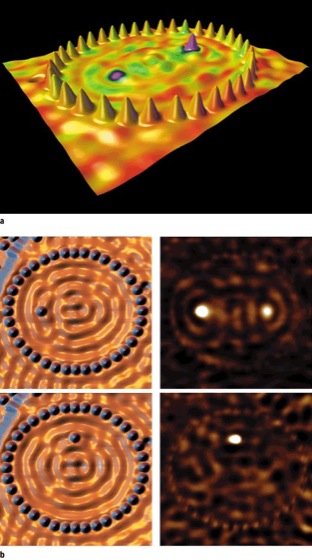 Wave-particle dualism: Researchers at the IBM Research Division in San Jose succeeded in discovering a “quantum mirage”: Using a scanning tunneling microscope, they arranged an elliptical ring of cobalt atoms on a copper surface, which “fenced in” the electrons near the surface; this creates a wave pattern (a). The shape and size of the ellipse define the quantum state of the electrons; here it is chosen so that the electron density in the focal points is particularly high. If a cobalt atom is now placed in one focal point, the electrons in the other focal point show the same properties as if a cobalt atom were also there (b). However, if the cobalt atom is not focused, the phenomenon does not occur (c). (Courtesy of IBM Research, Almaden Research Center)