What do you call a cat

Cats are carnivores. They are among the most popular pets.

Our house cats are mostly just called cats. They come in all sorts of colors and with short or long hair. They are descended from the African wildcat and belong to the cat family and thus to the mammals. So they are closely related to the lion, the tiger and many other species.

Humans have kept domestic cats for 10,000 years. In the beginning, the reason was probably that cats catch mice. As well as grain, mice eat almost any food they can find in a house. People are therefore happy about a cat that ensures that there are fewer mice.

But many people also like to keep a cat as an animal to stroke. In ancient Egypt, cats were even worshiped as gods. Mummies of cats have been found. So some cats were prepared for an afterlife in the same way as pharaohs and other important people.

What are cats particularly good at?

Cats can turn their ears to focus on a particular sound. With the whiskers they find through narrow passages.

Cats are hunters and can move very quickly. Some cats can go up to 50 kilometers per hour. It's as fast as a car that drives in town. Cats don't see as broad as horses, but only what is in front of them. In the dark, a cat sees six times better than a human. However, their hearing is even more astonishing. Hardly any other mammal has such a good one. The cat can turn its ears and listen to a certain place.

Cats can smell a little worse than dogs. For this they have an excellent sense of touch. The long hair around the mouth is called "whiskers" or "whiskers". You have very sensitive nerves at the bottom. They notice whether a passage is too narrow or just enough.

Cats have a particularly good sense of balance. This allows you to balance well over branches. In addition, they are absolutely free of vertigo. If they do fall down somewhere, they can turn over into the prone position very quickly and land on their paws. Cats don't have a collarbone. This makes their shoulders more flexible and prevents them from injuring themselves in an impact from a great height.

How do cats behave?

Cats lie in wait and then jump at their prey.

Cats are predators. They usually hunt alone because their prey is small: mammals such as mice, birds and sometimes insects, fish, amphibians and reptiles. For climbing and hunting, they use their claws, which are usually hidden in the paws.

It used to be thought that cats mostly lived alone. You see it differently today. In places where there are several cats, they live together peacefully in groups. These consist of related females with their small and larger pups. Just too many males cannot stand it in a group.

How do domestic cats get their young? 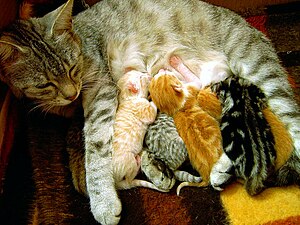 Mothers of cats suckle their young for about a month.

Some breeds are ready to reproduce after six months, while others can take up to two years. The males are called hangovers. You can smell if a female is ready for it. Usually several male cats fight for a female. In the end, however, the female decides which tomcat can mate with her.

A female cat carries her kittens in her stomach for nine weeks. In the last week it looks for a place to give birth. This is often their favorite person's room. The first time a cat usually gives birth to two to three young animals, later up to ten. Of so many, however, a few usually die.

The mother feeds her young animals with her milk for about a month and keeps them warm. After about a week, they open their eyes. But they can only see really well after about ten weeks. Then they explore the closer environment, later the wider one. The mother also teaches the young to hunt: she brings live prey to the nest so that the young can hunt for them. Young kittens should be able to stay with their mother and siblings for about three months for healthy development.