How can I convert ethanal to propanone

Acetaldehyde is the common name for ethanal, the second simplest aldehyde or alkanal. 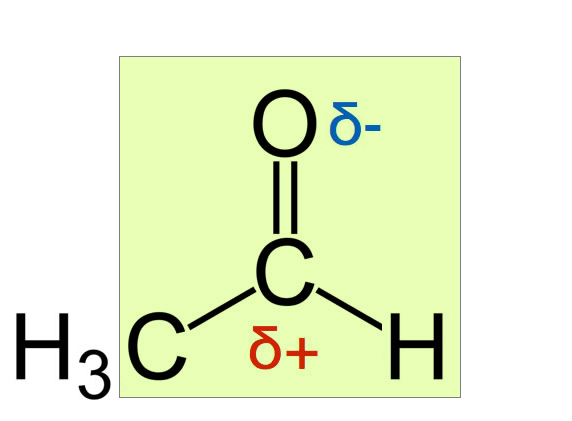 A carbonyl group C = O is with a methyl group -CH3 and linked to an H atom. Because of the high electronegativity of the O atom, the C atom of the carbonyl group is positively polarized.

The green square in the figure indicates that the carbonyl group and the two neighboring atoms are on the same plane. This is due to the sp2-Hybridization of the atoms involved in the C = O double bond.

In chemistry class, acetaldehyde can be easily made from ethanol by oxidation. The best known experiment, which is represented in almost every textbook, is the oxidation of ethanol with hot copper oxide. To do this, a sheet of copper is heated in a bunsen flame so that a black oxide layer forms. The hot copper oxide is then kept in an evaporating dish with a little ethanol. It hisses and bubbles violently, releasing the pungent odor of acetaldehyde. The biggest surprise for the students is always the complete transformation of the black copper sheet into shiny metallic copper.

In industry, acetaldehyde is obtained "mainly through the addition of water to acetylene in the presence of mercury sulphate"[1] and by "direct oxidation of ethene with atmospheric oxygen in the presence of palladium (II) and copper (II) chloride"[2]. The "dehydrogenation of alcohol vapor over Cu / Zn or Cu / Cr catalysts at 250 - 400 º" is also possible[1].

A. is mainly used to produce acetic acid, but many other chemical compounds can also be produced from A., for example acetone and butadiene.

The boiling point of 20.8 ºC (therefore cool storage) is significantly higher than that of comparable alkanes, but also significantly below the boiling point of comparable alcohols. Alkane molecules are non-polar and not dipoles, hence the low boiling point of the alkanes. Alcohols, on the other hand, are not only polar and dipole molecules, but they can also form hydrogen bonds with one another. Acetaldehyde has a middle position. Because of the C = O bond, it is polar and a dipole on the one hand, but cannot form hydrogen bonds with other acetaldehyde molecules because the four H atoms are bonded to C atoms, but not to O or N atoms as required for the formation of hydrogen bonds.

Acetaldehyde is indefinitely soluble in water. Responsible for this is the O atom of the carbonyl group, which can form hydrogen bonds with the water molecules.

Acetaldehyde usually dissolves organic non-polar substances very well, which is why it is often used as a universal solvent for all kinds of things, for example for paints and varnishes, vinyl resins, oils and so on.

Acetaldehyde as the second simplest representative of the aldehydes also has all the chemical properties of the aldehydes. Most important for chemistry classes is of course the polar carbonyl group in the acetaldehyde molecule, to which both nucleophilic and electrophilic particles can attach. The typical reaction of the carbonyl compounds, the nucleophilic addition, is presented in detail on the separate pages of this homepage.

Acetaldehyde can be oxidized as an aldehyde, which then produces acetic acid. Conversely, acetaldehyde can also be reduced, with ethanol being formed again.

Acetaldehyde is an intermediate product in the breakdown of carbohydrates in animal metabolism. In humans, A. is also a breakdown product of ethanol in the liver, and A. is probably also responsible for the "hangover" condition that occurs after excessive alcohol consumption.

By the way, acetaldehyde is no longer allowed in schools because it is now considered carcinogenic (Category 1B)[3].