Where did you learn Tamil

The Scriptures of the World: The Tamil Alphabet 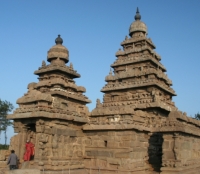 Now that we've introduced you to many languages ​​and language families, let's take a look at the various scripts that are written around the world. We start with the Tamil script which is in Tamil tamiz ezuttu(Eng. Tamil letters) means.

If you want to learn more about the Dravidian languages, you will find an interesting article on this weblog.

Origin and development of the Tamil script

The Tamil script has its origin in the South Indian Grantha-Font. The Grantha-Script was created over the Pallava- and Chera- Script from a South Indian Brahmi-Variant and is still used today in a modified form in South India to write the classic Hindu language, Sanskrit. The Brahmi-Script is considered to be the predecessor of all Indian scripts.

In the 3rd century BC - more precisely 254 BC - were the oldest known language testimonies of Tamil in a special form of the Brahmi-Script written as stone inscriptions. The oldest literary text in Tamil is called Tolkāppiyamand was probably written down around 200 BC. Tamil can look back on its own literary history of more than 2000 years and is therefore the only classical and at the same time modern language in India.

The first printed products in Tamil script were made by Christian missionaries in the 16th century. Some orthographic reforms of the Tamil script also go back to a missionary: the Italian Constantine Beschi (1680–1743).

Properties of the Tamil script

Like most Indian scripts, the Tamil script is only used for one language, Tamil. Only a few also Badagaor Saurashtri, two regional languages ​​common in Tamil Nadu, written in this script. Very rarely, Tamil Brahmins also write Sanskrit in the Tamil script. For this, however, special characters had to be developed so that the additional sounds occurring in Sanskrit can be expressed in Tamil script.

As in the entire South Asian-speaking area, the phenomenon of diglossia, i.e. bilingualism, predominates in Tamil. Tamil knows two forms of language. One language form is the high-level or written language based on classical Tamil, which differs greatly from the second language form. The second form of language is an "everyday language" that is used in conversations with friends and acquaintances and in informal texts (e.g. e-mails and SMS). The Tamil alphabet is well suited, the standard Tamil language செந்தமிழ் (centamiḻ) to write.

The high-level language is mainly used in printed texts, in radio broadcasts and on formal occasions. The colloquial language கொடுந்தமிழ் (koṭuntamiḻ), on the other hand, is difficult to record. Oral use is the language of normal everyday conversation.

In the 19th century, attempts were made to create a written version of the Tamil slang; it is mainly used today in school textbooks and can be read in the dialogues of modern Tamil prose.

Although the Tamil script is a typical Indian script, it differs significantly from other Indian scripts in two respects: On the one hand, it has a significantly lower number of characters, since in the phonology of Tamil the aspiration (i.e. the breath) and voicing does not determine the meaning of a word. In addition, the Tamil script does not recognize ligatures, i.e. connections between two letters to form a formal and optical unit, and a connection of consonants through a point placed above the sign, the puûûi, shown.

Font: Tamil is a phonographic font

The Tamil script is a "phonographic" script. This means that a character stands for a spoken sound. More precisely, it is - as with almost all Indian scripts - a combination of letters and syllables.

Such a writing system is also known as Abugida- Script or "alphasyllabic" script. The individual characters stand for combinations of sounds, which in turn consist of smaller syllable characters.

The Tamil script runs horizontally and clockwise (i.e. from left to right) and is written without any distinction between upper and lower case. Since Tamil was originally written on palm leaves, the script developed round characters, since otherwise angular lettering would have split the leaves.

There are 32 sounds in Tamil: 12 vowels including two diphthongs, 16 consonants and four additional consonants, which appear in loan words from English or Sanskrit.

Each of these sounds is represented by its own symbol: the twelve vowels each have their own symbol, as do the 16 consonants, two of which each have two graphic variants. So there are 18 characters for the 16 consonants that have to be learned. In addition to this, the Tamil alphabet contains five other characters, the so-called Grantha-Characters that represent certain sounds of Sanskrit loanwords. Four of them represent the four additional consonants, the fifth shows a certain sequence of consonants.

There is also a special consonant sign, the āytam(ஃ). It comes from Old Tamil, where it represented the velar breath [h]. Today, however, it has a different function and is always in front of the consonant sign for pset and together with it denotes the fricative sound [f] in English loan words.

By combining the 18 or (including the Grantha sign) 23 consonants with the 12 dependent vowel signs, 216 or 276 consonant-vowel connecting signs can be formed.

There are five different vowels, each of which has a short and a long form. The long vowels are spoken twice as long as the short ones. In addition to these five vocabulary pairs, there are two short diphthongs. They are distinguished from one another by their own characters.

In the alphabetical order, the vowel pairs and diphtongs come first, then all the consonants and finally the five Grantha signs.

Here you can find this overview of the alphabet of the Tamilal PDF for printing.

Diacritical marks are small characters such as dots, dashes, ticks or small circles that are placed before or after the consonant symbol (free form symbols) or appended to it (bound form symbols). The inherent vowel awill be replaced by another in such a case. An example is கா for kāor மா for mā. Consonant and secondary vowel signs together result in a syllable, which is the basic element of writing.

The alphabetical order is as follows: First come the vowels, then the consonants and finally the Grantha signs. In the case of vowels, the short and long vowels appear in pairs, with the two diphthongs being inserted into this sequence. The consonants begin with the aytam, then the remaining consonants follow. The five Grantha characters appear at the end of the alphabet.

The traditional Tamil numbers actually no longer appear in modern Tamil texts. The Arabic numbers are mostly used in their place.