When does autism usually occur?

An early diagnosis of autism is very important in order to be able to support affected children in the best possible way. By observing attentively, parents may notice the first signs at the end of the first year of life and in early childhood, such as unusual behavior towards noises. 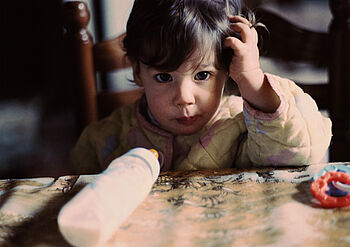 “Infants will respond to their name over time and turn their attention to the person who called it. A child with autism does not, or rarely, turns to a parent when they hear their name. However, it can suddenly turn its gaze to the television when it is switched on. Parents of a child with autism often mistakenly suspect that their child has a hearing problem, ”says Dr. Monika Niehaus from the professional association of paediatricians (BVKJ) a possible sign of autism. “Parents should tell their pediatrician about it in any case,” she adds.

American researchers have identified other possible early signs of autism in addition to the frequent lack of response to parental calls. According to their experience, a toddler who is later diagnosed with "autism" has less interaction with others. For example, if the mother or father looks at an object and points to it with a finger so that the young child will follow their gaze, it will usually turn its head towards it. The baby alternately looks to his parents and then back to the object shown. However, most children with autism lack this early form of communication. The same applies to imitating grimaces, sounds or gestures, such as waving, clapping or the like. Children with autism rarely show this behavior either. “Affected children seem to live partially isolated in their own world and hardly register their environment. It can also appear as if they are not compassionate. Because children with autism show little reaction when they see another child crying, ”says Dr. Never house. Another typical characteristic of affected children is that they lack the ability to role-play. In "normal" children, "pretending" usually develops at the end of their second year of life. In contrast, children with autism predominantly play with certain toys, concentrate only on these or, for example, obsessively pay attention to the movement of their hands.

Parents should speak to their pediatrician about the behavior mentioned above. Autistic disorders are developmental disorders that are characterized, among other things, by delays and differences in social and communicative behavior. The severity and severity of the disease can vary greatly from person to person.