We call it singing when we make music with our voice. As with speaking, air comes out of the lungs and is set in motion by the vocal cords. The difference is that when you sing you can have a significantly higher difference in tone and a sung tone has a clearly definable frequency. This means that you can measure the vibrations and thereby clearly determine the pitch.

The vocal folds determine how fast a sung note vibrates. They are moved by muscles and give the air a certain space. If this space changes, the tone becomes higher or lower. We can write down different notes as notes. A melody is created from several tones in a row.

Rolando Villazón is an opera singer from Mexico. His voice is tenor, a high male voice.

As children, boys and girls can still sing high-pitched. Boys also create high soprano tones. But when they are 12 to 14 years old, their voices break. Then her voice becomes deeper. You can also hear that when speaking. But even adult men can sing high with a little practice: With the so-called head voice, also known as falsetto, they can also create tones in vocal ranges for women.

What kinds of singing are there?

The Freiburg Cathedral Boys 'Choir is a boys' choir. They sing in a church.

People all over the world often imagine something very different when it comes to singing, as they do with music. The habits of how to sing differed according to the culture. For people from Europe, chants by Muslim Sufis or Buddhist monks sound a little strange. Likewise, people from other countries, cultures or religions can find our chants strange.

But even in our music, which is called Western music, there are different ways of singing. For example, they differ in different styles of music. People who sing classical music such as operas need a very clear voice and often a large vocal range. That means they can sing high and low. Pop singers also often sing very clearly and high-pitched when they are women.

In other genres of music it doesn't really matter. In rock music, the singing is often very rough, it is not so important to hit many different notes. Rock music has adopted that from blues and country. In rock subspecies such as punk or heavy metal, the singing is very aggressive and loud and reminds of screaming. But that's not true everywhere: especially in heavy metal there are singers who, like in an opera, can sing very high and clear and have a large vocal range.

In other musical styles, singing does not play a role, such as in electronic music. If there is singing here, it's very simple and not that important to the music. It is the same with hip-hop: here they rap, that is, they speak rhythmically. Again, singing is not that important, if there is any at all. 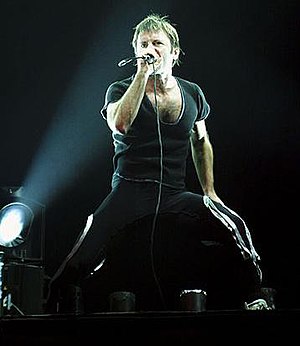 Bruce Dickinson is an example of a rock singer who could also sing operas. His high-pitched voice earned him the nickname “Air Raid Siren”. He has a vocal range of over four octaves and can use techniques such as vibrato even with high notes.

Everyone can make notes with their voice and thus create melodies. When someone says they can't sing, they mean it doesn't sound that good when they sing. This could be because his voice is not very extensive, it is very rough, or because there are many notes that he does not hit exactly.

Singing can, however, be trained: anyone can take singing lessons. In doing so, you learn how to hit the right notes and how to sing even more difficult songs. With practice, you can get your vocal cords to make sounds they couldn't make before.

Professional singers sing as a profession. They have often learned at music colleges how to loosen their vocal cords, how to hold their bodies properly, and how to hit and hold notes correctly.

There are also other search results for “Gesang” from Blinde Kuh and Ask Finn.