How are airbags deployed?

The airbag (airbag) is a component of passive safety in automobiles. Like the seat belt, the airbag is one of the occupant restraint systems in motor vehicles.

Brief history of the airbag

Triggering and process of the airbag ignition

After an accident, drivers often wonder why the airbag did not deploy. The triggering algorithms that ultimately lead to the triggering command coming are quite complicated. Not every impact triggers a trip.

A distinction is made between different crash severities and trigger thresholds.

Through numerous crash and driving tests under extreme conditions, the triggering thresholds were set by BMW for all possible types of accidents. The trigger thresholds depend on the severity of the crash. The crash severity is divided into 4 groups:

From crash severity CS 2 (moderate collision), the driver / front passenger airbag and the belt tensioner are triggered. The safety battery terminal is activated, the electric fuel pump is switched off and an emergency call is made if a suitably prepared telephone is available in the vehicle.

In the case of a crash severity CS3 (severe collision), the driver / front passenger airbag and the belt tensioner are triggered, but with a different time delay. 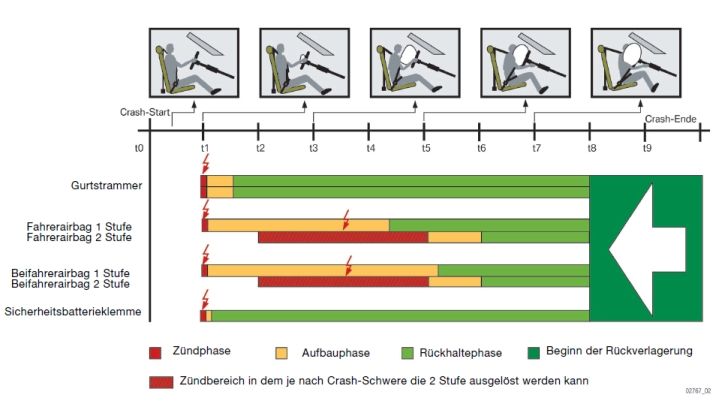 Another funny video about airbag deployment.

Is the video a fake video? Can the airbag even deploy when the vehicle is stationary?