In the mid-1970s, I was born eighth in Jerusalem into a family of seven. My “African” father came from the city of Massenya in Chad, my “white” mother was a Palestinian from Jericho in the Jordan Valley. I grew up in the African Quarter as a muwallad on. This is the name given to all children of the first generation of African migrants in Jerusalem who came out of a mixed, “African-Palestinian” marriage.

“Evil must be opposed with the power of good and love. When love erases evil, it erases it for all eternity. Cruelty, however, can only bury evil temporarily, for evil is a stubborn seed that thrives in secret whenever it is buried. And when it comes back, it's even more hideous. " 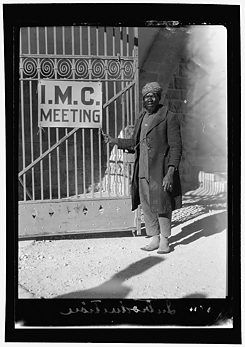 Guard at Auguste Viktoria Hospital, Palestine 1928 | © Library of Congress Jerusalem Afrikaner (al-afariqa al-maqdisin) or takarina(in the singular takruri) according to the definition of the Palestinian historian Aref al-Aref (1892–1973) from his book Detailed history of Jerusalem (1961) “One of the large families in Bayt al-Maqdis [Jerusalem], who come from Darfour and the surrounding area. They are referred to as a clan with origins in Tikrit, belonging to the 'Zoba', a clan of the 'Shammar' tribe. They were used by the government to guard and in return they were assured the safety of their schools, which they held in their homes, apartments, and halls around the Temple Mount. [...] They are black in color, tall and strongly built. "Hosni Shahin, a Palestinian researcher with an African background, defines it in his work African Muslims in Bayt al-Maqdisissued by the Jerusalem Waqf Authority (1984) as “African Muslims from several African countries including: Nigeria, Chad, French Sudan - now Mali - and Senegal. Therefore this group is made up of different African-Arab tribes as follows: The tribes of the Hausa, Salamat, Bargu, Zaghawa, Barno, Kaném-Bornou and Bilalah. "

This article deals with the socio-cultural status of black Africans in Jerusalem, which is closely related to their skin color, as well as the consequences of this status for their living and work situation. At the same time, this should provide information about the feeling of alienation among Africans in their Jerusalem environment and the alienation of the African community from one another. 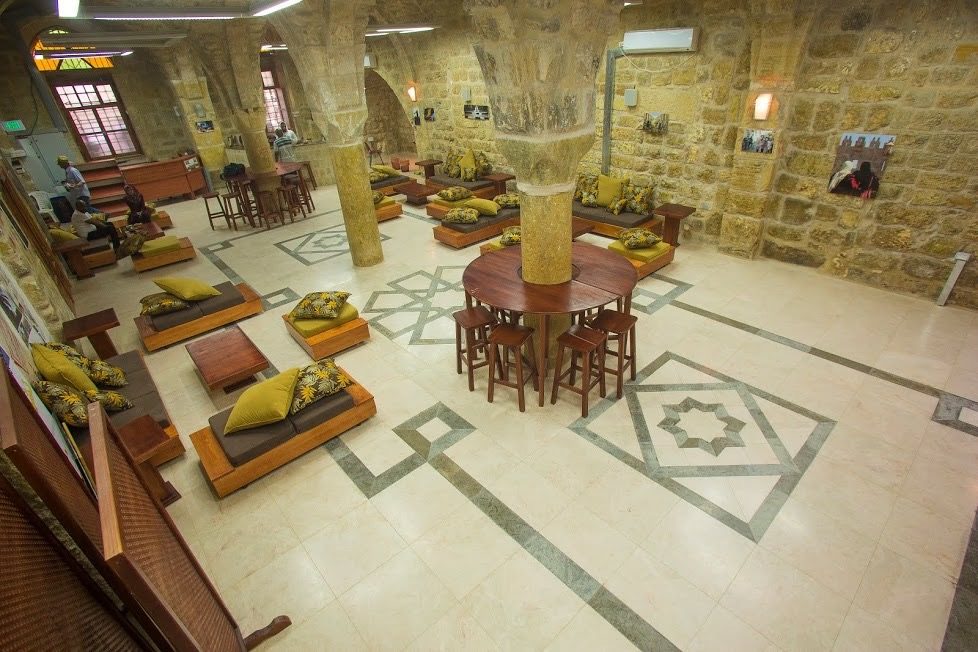 The Community Center, Jerusalem 2013. | © PrivatTo begin with, a look at the definition of the word “black” (aswad) in the dictionary: On the one hand, the skin color is pointed out here; on the other hand, the word also refers to the place where “black Africans” come from. The second point overlaps with the definition of Aref al-Aref, who sees the origin of the Jerusalem Africans in “Darfour and the surrounding area”. In both cases the word is placed in relation to a geographical area with specific cultural and religious characteristics.

This leads us to the question of the relationship and the influence that this geographical-cultural definition had on the difference in Palestinian thought between the free black African (Takruri) and the abducted “slave”. In addition, the question arises to what extent this concept has been internalized by the former, so that he also makes a distinction between his own status and that of the "other" African.


Determination of the socio-cultural status of black Africans

It may not be known to everyone that black Africans live in numerous settlements and camps in Palestine. Many Palestinian researchers and historians, including historian Huda Lotfy, historian Aref al-Aref, and researcher Ali Qleibo, believe that African contact with Palestine dates back to the Mamluks and Ottomans. 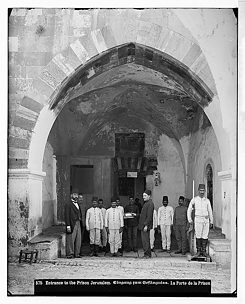 Prison entrance with Turkish soldiers, photo taken between 1889 and 1914, Palestine. | © Library of Congress In a study, Huda Lotfy examined records and documents from the time of the Mamluks that were found on the Temple Mount. In them the distinction is striking between the Tekruri black African, who is part of the Islamic community, and the non-Muslim black African, who was viewed as a "slave". Aref al-Aref and Ali Qleibo believe that the Tekruri black Africans were employed by the Mamluks and Ottomans to protect people and buildings, especially as khadim(Eng. servant) in holy places in Jerusalem and Mecca. Briefly should refer to the designation khadim which is problematic. The Egyptian legal scholar al-Qalqaschandi (14th / 15th century) interpreted khadimas a title from the Sultan's court, while the Arabic dictionary Lisan al-Arab understands the word only in the sense of a position: A khadimbe "Anyone who is in the service of another man or woman, whether serf boy or girl." The question arises as to how this differentiation between black Africans affected the formation of the identity of Takruri Africans.


The relationship between skin color, work area and living area 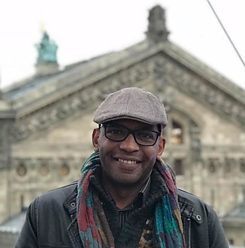 Yasser Qous | © Private My uncle Alhajj Jibril Walad Shiné - may God be blessed - has repeatedly and emphatically explained to me: "We are not slaves, we are free". For me, his words were a first indication of how much the Africans themselves have internalized this socio-cultural distinction and that this has led to the formulation of a new identity that is alienated from their African background. It must be emphasized here that their origin or origins actually lie on the Arabian Peninsula: "Our origin is in Jeddah", as the Mokhtar [Arab scholar] Muhammed Jiddah said in a 1997 interview.

A look at the connection between work area, skin color and physical characteristics, as established by the historian Aref-al Aref, gives a second indication of the socio-cultural status of black Africans. By having them as a "Black-skinned, tall and strongly built"describes and cites this as the reason for their particular suitability in building and personal protection, it becomes clear that the understanding of this population group did not go beyond stereotypes: In the eyes of those around them, they were good for work that required physical skills, but not intellectual ones.

Thirdly, the connection between skin color and living situation should be addressed. Most Jerusalem Africans live in the so-called African Quarter, which consists of two historical buildings, namely the Ribat al-Mansouri (The Ribat: a fortified complex that mostly served as a pilgrims' hostel, but could fulfill various functions) and the Ribat al-Basiri. They were built under the Mamluks in the 12th century and are located near the Council Gate (Bab al-Nazir), one of the entrances to the Temple Mount. These fortified buildings were initially used as hostels for pilgrims, but were used as prisons at the end of the Ottoman era, more precisely between 1898 and 1914. The first, Ribat al-Mansouri, was also called the "blood prison" and housed Arab prisoners sentenced to death. Ribat al-Basiriit was called “Ribat Prison” and it was used for inmates of various lengths. After 1929 the two buildings were converted into residential quarters for the Jerusalem Africans. Since then, some Jerusalemites have been using the term “slave prison” (habs al-abid) for them, which combines the historical function of the buildings with the idea that black people are slaves.

In Jerusalem society, some try to downplay the racism that such labels carry. On YouTube you can find comments about an ideal Palestinian society: "We are one, we are all brothers, we are all equal," it says. The use of the term “slave prison” is little more than an expression of ignorance; there is no cultural or social racism against black Africans behind it. That is why there is no racism in Palestinian society as a whole and we are all just "servants of God", in the religious meaning of the word slave, abid li-llah. 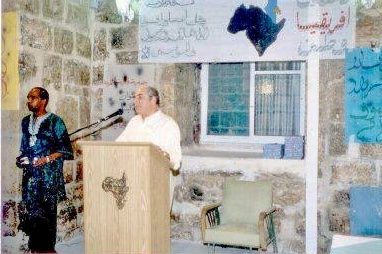 Yasser Qous (left) and Faisal al-Husseini, former PLO representative in Jerusalem, at the opening of the community center, Jerusalem 1996. | © Private I consider this assessment to be questionable and unrealistic. How can these YouTube voices explain or justify us continuing the label abid al-duyuk ("Slaves of Duyuk") is used for those black residents who live near the village An al-Duyuk live north of Jericho? Or the name hara al-abid (“Slave Quarter”) for neighborhoods in various cities, towns and camps in occupied Palestine and the West Bank, in which mostly black people live?

In conclusion, it can be said that the problem of different definitions as well as the stereotype that is based on the connection between skin color, work area and residential location forms the basis for assessing and understanding the socio-cultural status of black Africans in Palestinian society. On the one hand there is the definition of al-afriqi al-aswad, of the black African, exposed to the process of cultural assimilation and substitution (takruri); on the other hand, it is limited in time to the spread of Islam in Africa, if, for example, Aref al-Aref writes that the African peoples had no civilization or culture before (i.e. before the Islamization and Arabization of African society). Although the difference was certainly great, I have tried to show with previous examples that the cultural boundaries between Palestinian society and the Takruri African as part of the Islamic ummah are blurring. The racist differentiation still exists, however, and so the black African remains whether or not Takrurior not, in the Arab imagination al-abd al-aswad - "the black slave".
<?