What is Payola in the music industry

The Payola business with playlists: This is how unknown artists trick Spotify and Apple

Music streaming services like Spotify and Apple Music have not only changed the way music is heard today. With the introduction of playlists as one of the most popular places to go for discovering new songs, they have also ensured that savvy marketers with pay-to-play services and tools try to buy into lists in order to benefit from their enormous reach. Apparently with success: Unknown artists suddenly get millions of plays by being placed on large playlists. OMR presents current cases and explains the so-called "Payola phenomenon".

In the course of preparations for the recent IPO, the Swedish music streaming service Spotify confirmed what many have long suspected: playlists are one of the, if not the dominant forms of use. A third of the total duration of all streamed pieces of music is already generated via the lists, sometimes with millions of followers. The places are correspondingly popular with artists - who, with the help of service providers and questionable methods, keep trying to get their tracks listed.

Tommie King, for example, a rapper from Atlanta, claims to have managed to get his songs on almost 600 Spotify playlists to date thanks to his manager. And not because, organically, more and more users would have noticed his music, but because he paid to be included in the lists, as he openly explains to The Daily Dot. While he only had around 1,500 fans on his Facebook page, his four most popular tracks on Spotify had a total of over 420,000 plays. Nothing works today without playlists, says King. Streams are everything.

Playlist Marketing as the Most Important Lever in the Music Industry?

But Tommie King is by no means the only artist who has helped with money or other strategies to get placements in playlists. Another example of no-name artists who have achieved impressive play numbers with the help of playlist marketing and the use of specially built tools is the electro DJ duo “MaWayy”. They used numerous platforms and tools - and landed on 19 playlists within a very short time. The result: just over a million plays for the track “Wrong” and inclusion in three of Spotify's biggest electronic playlists. The other most popular songs by the DJs meanwhile only make 49,000, 45,500 and less than 1,000 plays. 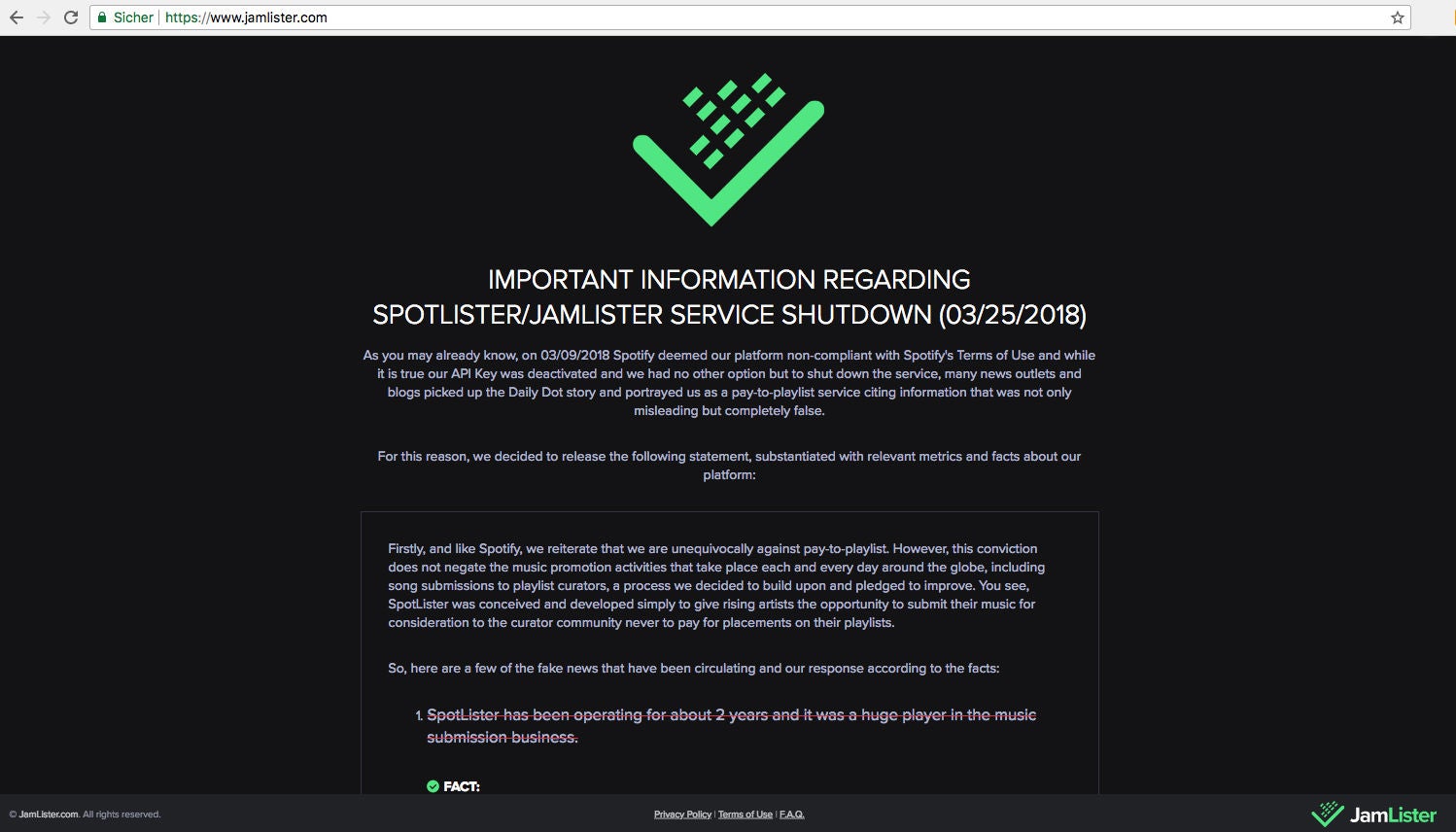 The website of the now discontinued service spotlister.com or jamlister.com

One of the tools MaWayy claims to have used for playlist marketing was "Spotlister - The Platform for Music Promotion". According to The Daily Dot, the creators of the Spotlister would have asked for good placements in large playlists between 1,000 and 5,000 US dollars. Danny Garcia, a 21-year-old New York student and one of two founders, explains how prices have changed over the past few months: “The playlisters started seeing that they were relevant and worth a lot more. There are some playlists that have 90,000 followers that can charge 100 to 200 US dollars for an add, all the way up to playlists with 500,000 who can charge 2,000 US dollars for one placement. "

Spotify cracks down on pay-to-play services

Apparently, Garcia's insights into the deal with The Daily Dot were reason enough for Spotify to take action against the offer. The service has been completely discontinued since March 25th, after being renamed to Jamlister. And at the request of The Daily Dot, Spotify denied any pay-to-play activities. The founders of the tool make a detailed statement on the website about the Daily Dot article - calling it fake news and simply completely wrong. Accordingly, the two would never have paid owners of a playlist for placements. During the almost three-month active phase, Playlister received an average of just 22 US dollars - as compensation for the time invested in listening to songs suggested by users.

In total, almost 25,000 suggestions from paying artists were received by playlist owners in the short time, of which just over 13,000 were processed. The rest of the money would have been reimbursed in full or in part. Only eight percent of all submitted suggestions actually made it into playlists. It should also be noted that the Service has not violated Spotify's Terms of Service in any way. The conclusion of the founders: "So, there is absolutely no influence we could have exerted on playlist placements." Nonetheless: Spotlister has been discontinued.

In the description of the portal, which can now only be accessed via web.archive.org, it says: “A desktop platform for Spotify playlists & artists to promote their work, get reviews, grow their audience and make some extra cash. Gain access to more audience. 11,299,196 followers & counting! ".

Statements by Cody Patricks to The Daily Dot indicate that the demand for help in achieving playlist placements will definitely exist. His company "Organic Music Marketing" offers classical music promotion, just like big music labels do. The company's website says, among other things, “Playlist Submission / Pitching Campaign 2
Price “for $ 750 to choose from. Within 30 days, a track would be pitched to over 200 official and independent playlists. The prominent note in the offer: “This service does not include guaranteed placement of any sort, as that would be considered payola. We do not participate in any form of payola. "

Whether there is actually no money going to playlist owners in the course of such campaigns, of course, cannot be said from the outside. Cody Patrick confirms to The Daily Dot that Playlister himself offer placements for money. He has repeatedly received offers from playlist owners, with different prices depending on the placement. The Spotify user Ignatious Pop (over a million followers) also reports numerous inquiries - for the placement of individual tracks or directly for the purchase of the entire playlist. 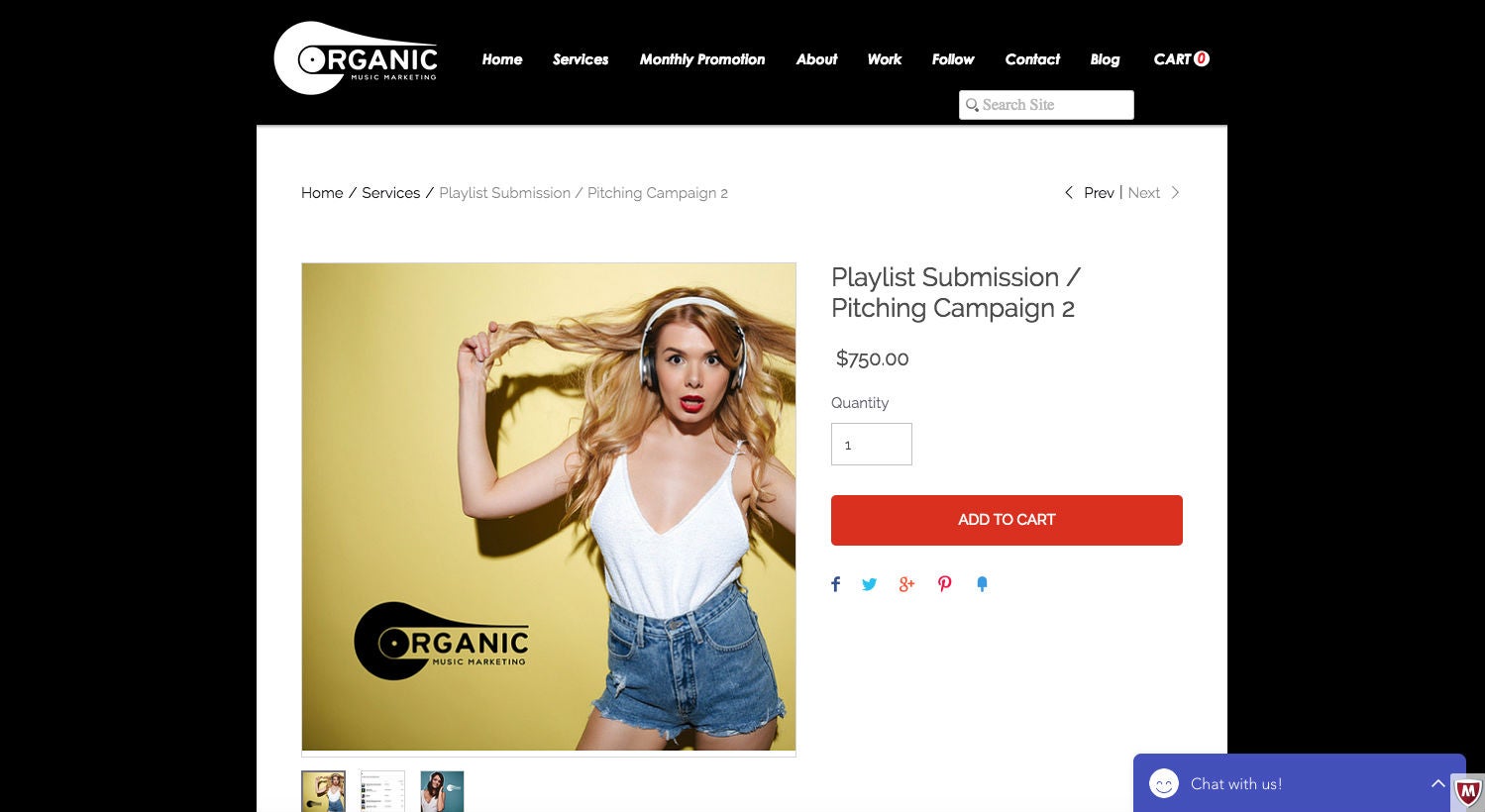 The Payola phenomenon was not just known today

The “Payola” phenomenon, from which Cody Patricks distances himself, became known to the general public as early as the late 1950s. The term, which is made up of the words "pay" and Victrola (brand name of a gramophone), describes a simple strategy: labels, managers or artists pay DJs so that their songs are played on the radio at all or particularly often. And exactly that was the case on a large scale in the USA at the time and caused a real scandal - including investigations by DJs, radio stations and music editors for corruption. Similar cases were last known in 2005; Sony MBG and Warner Music had to pay millions in fines at the time.

Since then, the music industry has changed dramatically. Streaming services are already responsible for two-thirds of all sales in the US music industry today. Worldwide, the Swedish provider Spotify has a clear lead with 70 million paying users. Apple Music follows with 36 million, but is growing much faster, especially in the USA. And Payola seems to be finding its way into the streaming industry.

Submithub.com, a platform launched by ex-Googler and operator of the music blog indieshuffle.com Jason Grishkoff, is pursuing an approach that is reminiscent of the Spotlister service, which has since been discontinued. After receiving up to 300 music suggestions by email at some point a day and having to give up listening to submissions at all, he got the idea. “That meant we were missing out on a lot of great music. That's why I thought about how this process can be simplified for everyone involved, ”Grishkoff told tonspion.de.

Blogs, music publishers and labels that are registered with Submithub will only receive all track suggestions via their own dashboard. Artists can either use the service for free or pay around one US dollar per track suggestion for guaranteed feedback. According to the website, there are currently 462 blogs and labels with a total reach of almost 50 million fans registered with Submithub, who have received a total of over 3.3 million suggestions. The average response rate is 73 percent. In this case, too, the business model seems to be walking a fine line: It cannot be determined whether artists really pay nothing for mentions in articles or for inclusion in playlists in the end.

The hip-hop playlists from Spotify and Apple determine the industry

How relevant the big playlists curated by Spotify and Apple really are is shown by the rapid rise of a few recently completely unknown artists. For example, the rapper Smokepurpp made it into the Spotify playlist “RapCaviar” with his single “Audi”, which currently has almost 9.3 million followers. The result: over 75 million plays, gold status and 36 million views of the right video on the WorldstarHipHop.com YouTube channel.

The artist Ricardo Valentine alias 6Lack has seen an even faster rise. In 2016 it had around 5,000 Twitter followers and was only known to a very small niche. Then his track "Prblms" landed on some Apple Music playlists, he received a contract with Interscope Records (including Eminem, Dr. Dre, Kendrick Lamar, Rich the Kid), two Grammy nominations and toured with The Weeknd.

Playlists as a hit-maker for streaming services

Above all, the big hip-hop playlists curated by the streaming platforms are incredibly popular on Spotify (RapCaviar) and Apple Music (The A-List: Hip-Hop) - and play a decisive role in the success or failure of tracks and artists the music genre that is especially popular on the internet. The respective owners of the lists have become extremely powerful global decision-makers in the music industry.

At Spotify, Tuma Basa took on the role of “Head of Hip Hop” until recently, although he recently left the company for YouTube. Basa says there are two ingredients for success in playlists: courage and data. During his time, Tuma Basa listened a lot to his own gut instinct - but of course could not only take his own taste into account. Analytics play a major role: "That's the beauty of our technology. It's all right there. All facts. No guesswork. ”In 2017, Spotify's big hip hop playlist turned into a concert series of its own. Together with Live Nation there were six concerts in different cities - with acts from the playlist, of course. This is to be expanded in 2018.

At Apple, the “Head of Hip Hop” is Carl Chery and heads the “A-List: Hip Hop” playlist. In his opinion, streaming is much more relevant than radio, especially in the field of black music. Unlike Basa, however, he almost exclusively relies on gut feeling and the taste of the team; the evaluation of data would be less important when it comes to selecting songs for the playlist.

Although smaller, unknown artists repeatedly manage to be included in the coveted playlists, the major labels still dominate the lists with the greatest reach. According to digitaltrends.com, 80 percent of the “RapCaviar” playlist on January 1, 2018 consisted of songs by Sony, Warner and Universal. With Apple's A-List: Hip Hop it was at least 70 percent. And yet there seem to be big differences in the selection of tracks: Also on January 1st, only 18 of the 50 songs from Apple's list should also have been in Spotify's selection.

One thing is clear: the playlist era is changing the approach of artists. Placements in the lists can redefine hits and acts, arise overnight, but just as quickly drop them again. A year ago, OMR already described the “playlist effect”, which has increased significantly since then. As long as the relevance of music streaming and playlists continues to grow, service providers and marketers will probably also try to outsmart the mechanics of the platforms. Plays can still be bought very quickly and easily today; In dozens of Facebook groups, users exchange ideas about playlist strategies. It is hard to imagine that pay-to-play services (Payola) can be completely excluded and prevented. And for so long, artists, some of whom are completely unknown, will continue to reach millions of plays out of nowhere and appear in large playlists.