Is there a 5th basic force

Is there a fifth basic force in the cosmos?

Mysterious anomaly: The result of a particle experiment sparked discussions in the physicist community. Because an anomaly discovered during the decay of radioactive beryllium could, according to some researchers, indicate a still unknown fifth basic force of the universe. They believe the existence of a “dark boson” is possible - a force particle that acts primarily on dark matter.

The current discussion was triggered by an experiment by Hungarian researchers who examined the particles formed during the radioactive decay of beryllium-8l. The aim was to find evidence of “dark photons” - a type of particle that, in addition to WIMPs, are considered to be possible particles of dark matter.

Particle flight in the "wrong" direction

The researchers did not find the dark photons they had hoped for, but they did find an anomaly that could indicate another unknown particle. With about every millionth decay, the electron and positron normally generated by a photon did not fly in the same direction, but in the opposite direction.

From these observations, the researchers concluded that an unknown particle with about 30 times the mass of an electron could have formed in these decays. What it could be about remained unclear. “They didn't know whether there was a matter particle or a force-transmitting particle here,” explains Jonathon Feng from the University of California at Irvine.

Is it a force particle?

In order to create more clarity here, Feng and his colleagues have now analyzed the data from the Hungarian physicists and from similar, earlier experiments. They also come to the conclusion that the anomaly in the decay data could well indicate an unknown particle. But your theory goes one step further: you even suspect a completely new gauge boson behind the phenomenon. 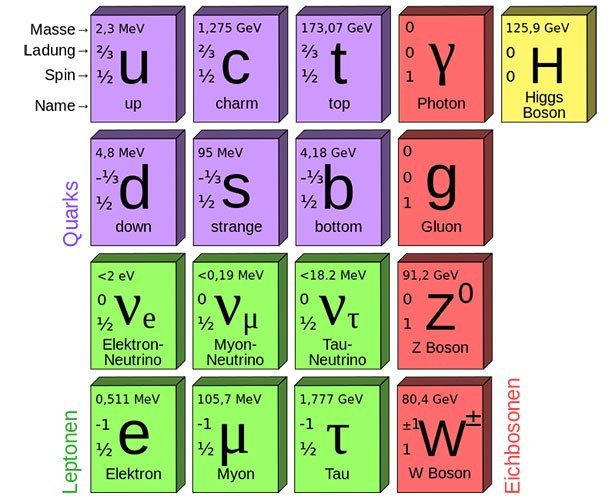 In the standard model of particle physics, four gauge bosons (red) are known so far - for the strong and weak nuclear force and the electromagnetic force. The graviton, the force particle of gravitation, has so far only been postulated theoretically and therefore does not appear here. © MissMJ / CC-by-sa 3.0

According to the current standard model of physics, these force particles are the mediators of the four basic forces of the universe - the strong and weak nuclear force, the electromagnetic force and gravity. For example, the quarks in a proton are held together by gluons, the photons are the carriers of electromagnetic force. In contrast, the carrier particle of gravity, the graviton, has so far been purely hypothetical.

A power of its own for dark matter?

According to Feng and his colleagues, the potential particle from Hungarians could be another of these carrier particles. Because according to their analysis, the data do not match either a particle of matter or the hypothetical “dark photon”. Instead, they consider the existence of a calibration boson for a fifth basic force to be possible.

In fact, the idea of ​​a further basic force is not new: physicists have long speculated about whether dark matter is possibly influenced by its own force. Feng and his colleagues believe it is possible that the anomaly in the decay data points to a boson of precisely this fifth basic force.

The particles of dark matter could therefore interact with one another by exchanging one of these “dark bosons”. In contrast, this boson would only interact to a very limited extent with normal matter, as the decay data suggest. According to this, it would have no effect on protons, but it would on electrons and neutrons - even if only from a very short distance.

"If that were true, it would be revolutionary," says Feng. "The discovery of a fifth basic force would completely change our understanding of the universe and would have enormous consequences for the unification of the basic forces and dark matter."

The worldwide manhunt is ongoing

However, the database for a fifth basic force and its boson is still fairly thin. "We are cautiously optimistic because our interpretation fits the data very well," says Feng's colleague Even Bartosz. "But it could also be an error in the experiment or there could be a nuclear physical effect that we have not yet seen."

The good thing about it: Whether this anomaly really exists can easily be verified through further experiments. Because the potential particle, with only 30 times the electron mass, is not very heavy and - if it exists - it would have to be produced and verified in a large number of laboratories. "There are many experimental groups around the world who can follow this trail - now that they know where to look," says Feng. Some working groups have already started the search.

Clearer dates in a year or two

This raises the question of why this particle has not been detected a long time ago. Feng explains it with the low interaction of this boson with normal matter. Because only certain particles are affected under certain conditions, this signal is easily lost in the noise.

The physicist is certain, however, that a targeted search will produce a clear result - and that in the next one to two years. It would then have to be shown whether there is actually a fifth basic force acting on dark matter. (Physical Review Letters, 2016; doi: 10.1103 / PhysRevLett.117.071803)