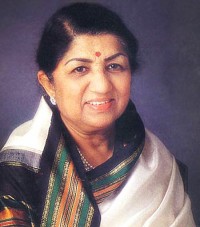 Lata Mangeshkar, born on September 28th, 1929 in Indore - that's the name of the most successful singer from India. She is the daughter of the then singer and theater owner Dinanath Mangeshkar and sister of the singer Asha Bhosle. In the mid-1940s, the two sisters began an incomparable career as playback singers.

To this day, Lata and Asha are among the most successful singers in the world. Indian films are the most watched films around the world. So anyone who has ever seen an Indian film has certainly heard Lata’s unique voice. Even if it is mostly younger singers who are used for the music these days, Lata and Asha will certainly remain Bollywood legends that have lived for a long time.

For more than 50 years, Lata has been lending her voice to star actors from India, such as: B. Nargis, Aishwarya Rai, Kajol or Preity Zinta. Your voice was and is India's most popular voice. In addition to the soundtracks for the Bollywood films, Lata also released his own albums, also in a modern musical style.

It was her father (then also a singer) who taught her the traditional singing techniques. Lata later got singing lessons from the famous singers Ali Khan Sahib and Amanat Khan. Apparently Lata already proved to be a little natural talent and mastered even the most complicated techniques straight away.

The beginning of her career was a bit bumpy. Because in the 1940s, low voices were popular with female singers. Her voice, on the other hand, is quite high and "thin", which is why she received quite a few rejections from the studios at the time. When her father died in 1942, Lata took care of her family by trying herself as an actress and starring in at least 8 films. She was also allowed to work as a playback singer in most of the films. In the film called "Kiti Hasaal" she was also involved as a playback singer, but the scene in which her singing appeared was cut out.

Although Lata does not have a proper school education, she has now received 6 doctoral degrees from various universities. At Lord’s Stadium in London, she was even given her own spectator box in her honor, so that she can watch cricket - her favorite sport - undisturbed.

- can sing in 3 octaves
- she always sings barefoot and keeps her voice fit with chillies
- Handwrite her new lyrics first before she sings it in
- she was the first Indian woman allowed to perform in the Royal Albert Hall
- Over the course of her life she has received 45 awards, including the most honorable awards in India
In 1989, the honorary citizen of Houston / Texas and Georgetown founded the "Lata Mangeshkar Medical Foundation Hospital", in which 450 beds are available for destitute and needy sick people. Since her father died because of the lack of financial means, the poor are treated here free of charge.

In 2001 she received the highest Indian award, the Bharat Ratna, which besides her only high personalities the Indira Gandhi and Mother Teresa have received. Attached, Lata Mangeshkar has received 45 awards over the course of her life, including the largest and most honorable in India. This accumulation of honors confirms the skill and talent of this millennium singer. Bollywood wouldn't be what it is without Lata Mangeshkar.