What happened in the windmill 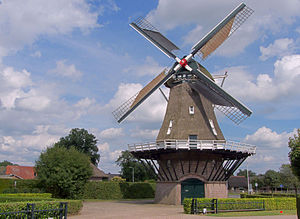 A Dutch post windmill in the Netherlands. In the middle of the building you can see a kind of balcony, the gallery. From there you turn the wings to cover them with cloth.

An old flour mill with two round grinding stones: the lower stone lies still while the upper one rotates. The drive is from below. The grains fall from the top of the funnel and get between the millstones.

Most mills grind cereal grains into fine flour. This can be wheat or rye, but also corn and many other types of grain. The man who operates such a system is the miller. The farmers used to bring him the grain himself and he ground it into flour. The old saying "first come, first served."

Mills used to be powered by wind power or by water power. The reverse is true, however: not every wind or water wheel drives a mill. You often just mean it that way. There are also sawmills with which tree trunks were cut into beams and boards. The windmills in the Netherlands were often water pumps that carried water over the dykes.

Then there are paper mills, stone mills, feed mills and many others. Everyone probably knows a coffee grinder or a pepper mill. You can use it to grind coffee beans or peppercorns by hand.

How does a mill work?

A conventional grain mill has two grinding stones. The lower stone lies still while the upper one rotates. It is called the runner stone. The grain can be filled in through a hole in the middle of the runner stone. The stones must be perfectly level and have fine grooves in the surface, just like a file. The miller sharpens the grooves from time to time with a special hammer. In addition, he has to set the distance between the millstones precisely so that the grain does not get too hot and burn due to excessive friction.

But there is more to a mill: The grain must first be cleaned in a system. The flour is sifted. Coarse parts are called "shot". You can sell them like that or grind them again. The grains and flour have to be conveyed through the system. A mill also includes conveyor belts and lifting devices. Finally, there is the packaging of the flour.

How did the flour mills develop?

Even in the Stone Age, people used simple grinding stones. A large flat or somewhat hollow stone was suitable as a base, on which a person rubbed the grains with a smaller, round stone.

The Romans operated their mills with mules. They were called Göpelmühlen. The oldest watermill in Germany dates from the early Middle Ages. Only later did we add the windmills.

The modern roller mills were developed during the industrial revolution in the 19th century. In it, the grains are ground between two large steel rollers. Some of them were powered by steam engines. Today roller mills are the most common in the world. However, it is powered by electricity.